What is Business Partnership Support?

Apply for support for business activities that also have a positive development impact.

What may the support be granted for?

Finnpartnership’s application workshops provide training on everything you need to know about Business Partnership Support and applying for it. Sign up to a worskhop now!

Read below for more information on business partnership support. You will obtain additional information by accessing the dropdown menu.

What is Business Partnership Support?

Business Partnership Support is financial support for the planning, training, piloting and development of local business phases of projects involving developing countries. Finnish companies or other operators are eligible to apply for the support for starting business activities that aim to establish long-term, commercial cooperation that is profitable, including the research and training phases for importing. Projects are to aim to establish long-term business and partnership in the target country. Projects that primarily aim to export or identify distributors are not eligible for support. Read more in the ‘eligible project types’ section.

Who may apply for Business Partnership Support?

The support applicant must be the implementer of the project (e.g. company seeking to become established elsewhere or importer from developing countries) and the project must be significant to its operations. Applicants cannot be only in the role of a consultant in the project. Applicants are to have sufficient experience and commercial expertise in the industry associated with the project. In addition, the applicant must have sufficient financial and personnel resources to implement the plan. Every member of the consortium needss to apply for the support with an independent application and project budget. The decision on the governmental aid will be given to each member of the consortium separately.

Support can be granted for projects that aim to accomplish one of the following:

An eligible business partnership is a joint activity between Finnish organizations and target country organizations in one or several of the following ways:

3. Feasibility study for an investment project

The support can be granted to feasibility study for an investment project that is eligible for the Ministry for Foreign Affairs Public Investment Facility funding. Projects considered eligible for PIF funding are those whose concept the Ministry for Foreign Affairs has given a favourable statement on. Support can also be granted at discretion to other feasibility studies of investment projects carried out in LDCs or LMICs aiming at other similar development impacts. In this case, the condition for granting support is that the value of the investment project is at least EUR 1 million and the applicant has signed a letter of intent with the project financier or another document proving that the applicant may take part in the project.

The support can be granted for joint projects between civil society organisations/educational institutions/research institutes and companies related directly to companies’ Finnpartnership business partnership support projects or for projects under the Business Finland-administrated Developing Markets Platform Programme (DevPlat), so that the organisation or other operator is not seeking a business partnership that will produce a profit. An NGO/educational institution that is seeking to establish business for itself is not a support project. Instead, the project must have one of the other aforementioned goals. A support project is intended to develop the local community and must also be directly related to the project of the company seeking business partnership support or DevPlat’s support in, for example, the following ways:

Business Partnership Support can not be granted for industries that are on the exclusion list.

If as part of the project there will be exporting of a dual-use item (items that have both commercial and military applications) abroad, please take a look at the Ministry for Foreign Affairs’ Export control guidelines on dual-use items for companies.

The project budget in the Business Partnership Support application is drafted by dividing the project costs into one or more of the aforementioned project phases.

* Piloting refers to the testing of an existing technology/solution in a project country. A demonstration refers to the presentation of the effective functioning of a unit or similar.

** The studies and personnel training that are supported during the project phase must be related to one of the following: a. expansion of a product portfolio, b. finding new suppliers and c. subcontracting and similar partners, d. development of activities so they are easier to scale, e.  determining investment needs and their funding, f. improvement/development of working conditions, g. development activities so they are more responsible. 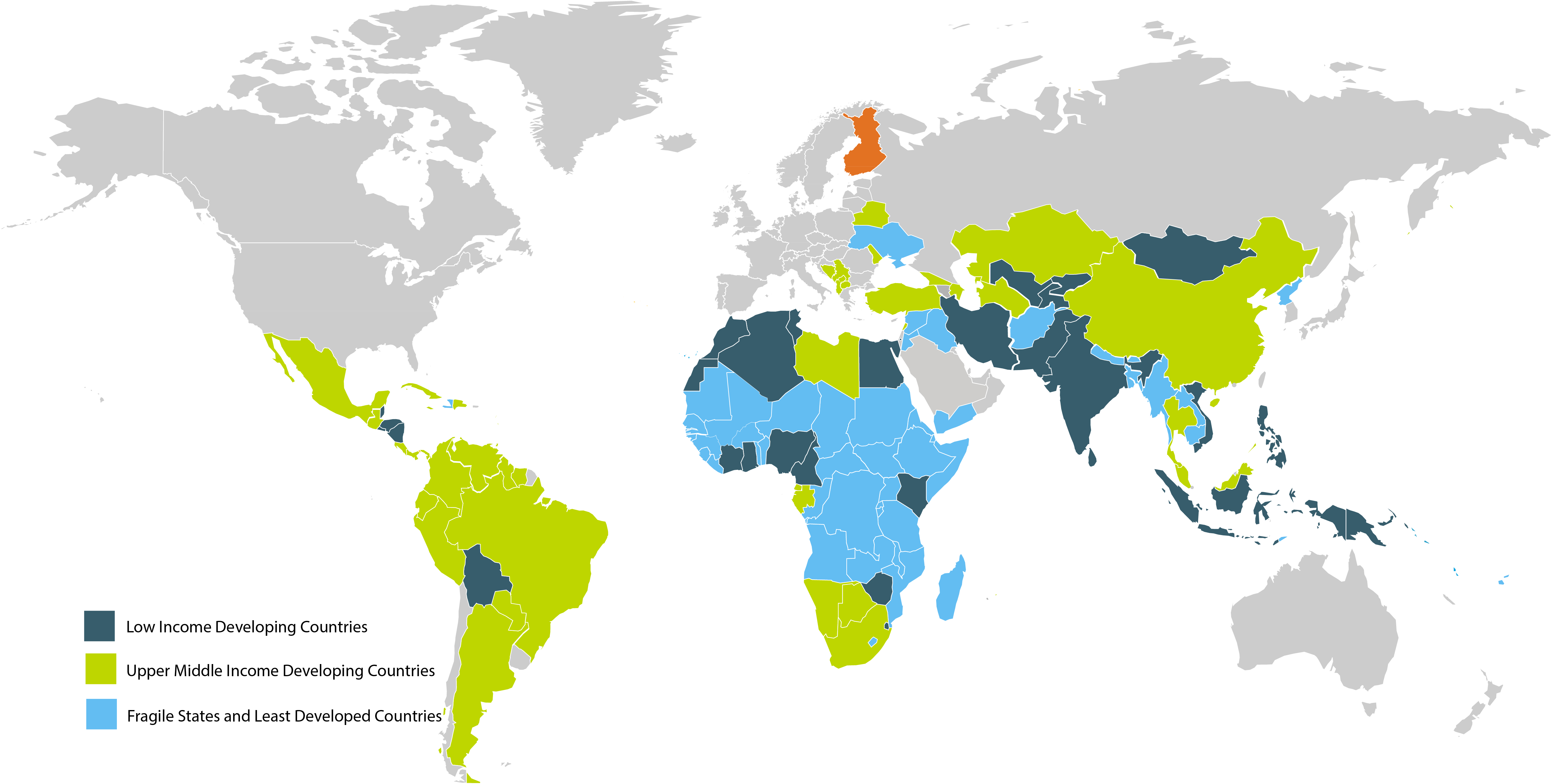 Target countries for business partnership support are the developing countries listed by OECD’s Development Assistance Committee (DAC). The applicant is to verify any potential restrictive measures imposed by the EU and/or UN on the countries. Information on the restrictive measures is located on the Ministry for Foreign Affairs website and the EU’s Restrictive measures in force document.. The amount of business partnership support to be granted is either 30, 50, 70 or 85 % of the total costs of the approved project’s budget. The support percentage depends on the level of development in the target country and the size of the applicant company (SME/large enterprise). The size classification is based on the current definition of a SME issued by the European Commission. Note! Ownership may also affect how a company is classified.

The support percentages of the most common project types can be found here.

NOTE! A project that the State supports by over 50 % is a public procurement bound by the Act on Public Procurement. The applicant is to examine how the aforementioned may affect implementation of the project. If so desired, the applicant can also select 50 % support.

Please note that Palau and Antigua and Barbuda have been removed from OECD’s DAC list of eligible countries for development support at the start of 2022.

What is a de minimis restriction and what types of projects does it apply to?

Business partnership support granted by the Ministry for Foreign Affairs is primarily subject to de minimis regulations . De minimis support is subject to Commission Regulation (EC) No 1407/2016, EU operational Treaty Articles 107 and 108 on applying low-value aid. According to this provision, companies and the groups they form can receive a maximum of EUR 200,000 of de minimis support during the current and previous two tax years.

Differing from the main restriction, de minimis support is subject to further restrictions with lower maximums for the following industries:

In addition, differing from the main provisions, de minimis support cannot be granted at all to the coal industry, for export support or for favouring domestic products at the expense of importing. EU state support and competition regulations limit and regulate the state support granted by member countries. The support is subject to such regulations if it fulfills all of the following conditions in accordance with Article 87.1 of the EC Treaty:

1. Public funds are channelled to public or private companies,

2. The company does not gain a financial benefit from the support,

3. The benefit is selective, it is only for specific companies and

4. The activity may distort competition in the trade between member states. The de minimis provision gives member states the possibility to grant low-value support amounts to companies, especially SMB companies, with reduced administrative procedures quickly and without reporting the support to the Commission. The regulation mandates that support activities that are not to exceed EUR 200,000 per group during any three consecutive tax years are not deemed government support subject to regulation.

A company applying for support is to report all de minimis support it has received over the current and two previous tax years from ministries, officials under ministry governance, ELY Centres, Business Finland, Finnvera Oyj, municipalities or municipality consortiums on the application form. The recipient of the support is responsible for ensuring that the total amount of de minimis support granted/paid by different actors does not exceed the aforementioned maximum amounts.

What action should an applicant take if they feel that their project is not subject to the de minimis restriction?

In principle, a project that has a target market for the business partnership entirely outside of the EEA does not distort competition within the EEA. If the company determines that the goods or services to be produced are intended only outside of the EEA and that the support cannot affect trade and competition between member states, the company is to sign a statement that provides the grounds for this perspective. The Ministry for Foreign Affairs makes the final decision on applying the de minimis provisions. For example, business partnership support projects that aim to begin importing to the EEA are subject to the de minimis restriction.   If there is any uncertainty with your situation, Finnpartnership will gladly provide additional information on de minimis restrictions.

Applying for support and the decision-making process

Applications for business partnership support can be applied for year-round. Finnpartnership processes the applications and provides the Ministry for Foreign affairs statements to support their decision-making. The Ministry delivers the discretionary government grant decisions on granting the support to the online service. The applicant will receive the decision in approximately 3-5 months.

Commercial viability of the project

The identification and management of the project’s risks have been taken into account comprehensively enough in relation to the size of the planned project.

The support is paid retroactively against realised costs. The costs must be in accordance with the terms and approved cost budget. Project costs must be audited. Written authorisation must be requested before implementing changes to the cost budget. Reimbursement can be requested in one or two installments. The last payment request must be submitted to the Ministry’s online service no later than on the date the support expires (24 months from the date of governmental aid decision). Read more on reimbursements.

What does an organisation that receives business partnership support commit to?

The recipient of the support commits to adhering to the general terms and conditions of Business Partnership Support.  The support can only be used to cover costs in accordance with the terms and conditions. The recipient of business partnership support commits to adhering to international standards pertaining to the environment, social responsibility, occupational safety, human rights and employee rights and to operate in compliance with local laws.

Due to the public nature of Business Partnership Support, the names of the organisations that submitted the application for support as well as the names, business IDs, size, sector, region and funding models of those receiving Business Partnership Support and the date they were granted the support and the amount of granted and paid support are all considered public information. In addition, public information includes the statistical data on the project listed on the application form, the name of the project and the project country.

Where can I obtain further information?

You can also contact Finnpartnership experts by email at fp@finnpartnership.fi or by telephone by calling +358 (0)9 348 434.